Bill Gates: ‘A Second Wave of (COVID) Vaccines Will Come Next Year’ After the First 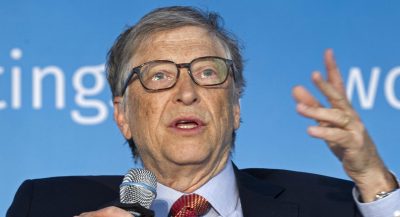 What Happened: Bill Gates recently appeared on NBC news stating that after the first generation of COVID vaccines becomes available, a second wave of vaccines will then hit the market, letting the public know that the COVID vaccine will be a multi-dose vaccine.

Approximately 6 months ago he gave multiple interviews, in one of them stating that “It is fair to say that things won’t go back to truly normal until we have a vaccine that we’ve gotten out to basically the entire world.”

In this most recent interview, he discussed how vaccine hesitancy is at an all time high, but did not address the concerns that vaccine safety advocates commonly bring up, some of which you can see in the articles listed towards the end of this article. Instead, like many other mainstream media interviews and pieces about vaccines, the idea that they’re not completely safe and effective for everyone seemed to be brushed off as a mere “conspiracy theory.”

From here he was asked about misinformation that’s spread on social media outlets, and the responsibility the government has to limit, stop and slow down its spread. But this begs the question, how much of this information is actually misinformation? If scientists and various publications raise legitimate concerns about vaccines, it also seems to be pilled into the ‘misinformation’ category in the minds of people like Bill Gates.

This is a very serious issue, as legitimate safety concerns regarding vaccines continue to be completely ignored and never really addressed. That being said, there is a lot of misinformation out there. Whenever writing about this topic it’s imperative one uses credible sources and information.

Right now we have a digital authoritarian “fact-checker” patrolling the internet telling people what is and what isn’t. Should people not have the right to examine information and sources for themselves and decide on their own what they choose to believe? Are we really so unintelligent that we can’t determine what a credible source is anymore, and require a ‘ministry of truth’ to tell us what is?

Why This Is Important: Why doesn’t mainstream media or Bill Gates actually addresses the concerns that are being raised by scientists and doctors? Why is ridicule and terms like “conspiracy theory” always used instead?

What are the concerns? Vaccine injury is one of them. The National Childhood Vaccine Injury Act has paid more than $4 billion to families of vaccine injured children. A 2010 HHS pilot study by the Federal Agency for Health Care Research (AHCR) found that 1 in every 39 vaccines causes injury, a shocking comparison to the claims from the CDC of 1 in every million.

Again, it’s no secret that vaccine hesitancy is at an all time high, even among physicians.  Professor Heidi Larson, a Professor of Anthropology and the Risk and Decision Scientist Director at the Vaccine Confidence Project stated at a World Health Organization (WHO) conference that:

The other thing that’s a trend, and an issue, is not just confidence in providers but confidence of health care providers, we have a very wobbly health professional frontline that is starting to question vaccines and the safety of vaccines. That’s a huge problem, because to this day any study I’ve seen… still, the most trusted person on any study I’ve seen globally is the health care provider…

Are these health care professionals being had by “conspiracy theories?”

Again, there are many concerns with vaccine safety, and if you browse through our site they are not hard to find. You can refer to the articles listed below if you want to dive deeper into a few examples that are backed by proper sources. This is the information that never seems to be acknowledged by the mainstream.

The question on many people’s minds seems to be if the vaccine will be made mandatory for things like travel or to enter into certain buildings. No doubt health authorities will face many backlashes and protests if this is the case. We will see what happens.

Featured image is from CE

With Crushing Sanctions on 18 Iranian Banks, Is Trump Trying to Leave a War Behind for Biden?

Gold Is Doing It Again?