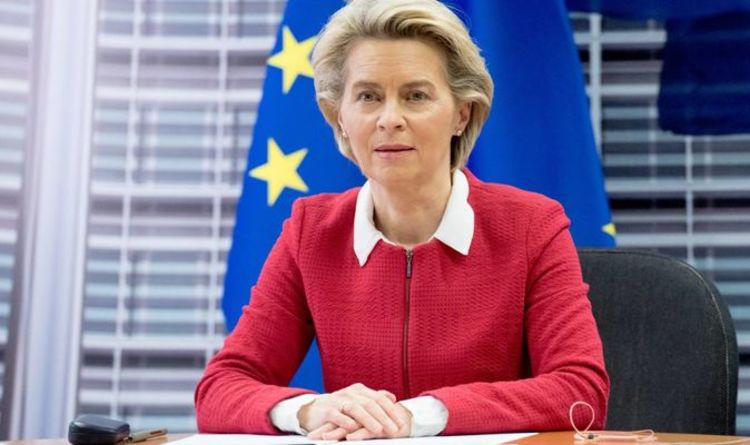 Brexit: Micheal Martin says deal ‘in best interest’ of everyone

Brendan Byrne urged Charlie McConalogue, Irish Taoiseach Micheal Martin’s Minister for the Marine, to “do his duty” taking a stand for the industry – while lambasting the EU. The argument stems from the bloc’s decision to reverse a so-called derogation that allows crews to weigh their catches away from ports, with eurocrats citing alleged violations of the initial agreement.

French, Spanish and Belgian boats which also fish in Irish waters are not required to do likewise.

Brendan Byrne, the chief executive of the Irish Fish Processors and Exporters Association, told Tom McSweeney during his Maritime Ireland radio programme on RTE Mr McConalogue should “do his duty and stand up for the industry he is mandated to represent”.

He added: “The Irish sector has had no visibility of the body of evidence against it that led to this draconian decision.

“We are working in a completely blind way. The Commission has taken this decision and, obviously, there is information contained within that, but none of us has seen that.

“This has had a devastating effect on the fisheries sector.

“We need more visibility, because this is going to impact every level, at every sector of the fisheries in the next two years.

“This body of evidence that no one has seen but it’s been compiled by someone that has led to a decision by the Commission to revoke our control plan.

“No one knows what we’re accused.

“We can defend our record on our plans, digitally and robustly and we will do that. But let’s see the charges against us.”

International Trade Secretary Liz Truss took a swipe at the European Union after the UK secured a new £1billion trade deal with India – something Brussels struggled to agree upon.

Prime Minister Boris Johnson announced a new £1billion trade deal ahead of his virtual meeting with India’s Prime Minister Narendra Modi which will see 6,000 new jobs created in the UK. Vacancies will be created at several medical, information, and clothes manufacturing companies after the two countries invest in each other’s infrastructure – adding to the £23billion a year deal already in place.

International Trade Secretary Liz Truss held several media rounds announcing and promoting the deal and could not hold back from rubbing it in the EU’s face during her appearance on LBC.

He asked: “Would this deal have been possible were the UK still in the European Union?”

She quickly replied: “I don’t believe it would have been no because the fact is the EU negotiated with India for quite some time and never got to a conclusion.”

10.18am update: Only the start! India trade deal could be worth £100bn in huge Brexit boost, says expert

Boris Johnson’s trade deal with India could eventually be worth up to £100 billion, unlocking unlock access to the world’s second-most populous country at its 1.4billion citizens in the process, an expert has said.

Mr Johnson unveiled a new £1 billion agreement with India’s President Narendra Modi which he says will create 6,500 British jobs, with the two due to formalise arrangements during a virtual meeting today.

He said: “It’s great to see that the UK and Indian governments have agreed to this trade partnership.”

9.15am update: ‘It’s insulting!’ Labour slammed for Hartlepool’s Remainer pick ‘What are they thinking!’

Andrew Pierce has raged at the Labour Party for choosing Remainer Paul Williams to stand for the party in the Hartlepool election.

Good Morning Britain guest Andrew Pierce attacked the Labour Party for their choice of Paul Williams to stand in the Hartlepool election.

He argued it was an “insulting” choice as the majority of the constituency had voted for Brexit.

He questioned what the party was thinking and insisted the voters would pick up on Mr William’s Remainer stance.

Scotland is woefully unprepared for go it alone even if Nicola Sturgeon does succeed in her quest for independence, with no guarantees of a swift return to the EU after Brexit either, MSP Michelle Ballantyne has warned.

The leader of Reform UK Scotland believes the SNP’s high levels of spending north of the border has left the country more dependent on the UK than ever – a fact she believes Scots will recognise if it should come the crunch.

With the Holyrood elections taking place on Thursday, First Minister Mrs Sturgeon is targeting the overall majority she believes will bolster her case for a second referendum on the subject.

But Mrs Ballantyne said Mrs Sturgeon’s party was purposely avoiding any discussion of the pitfalls of breaking away.

Liz Truss has outlined a planned trade deal with India which could see Britain secure almost £50 billion of trade with India by 2030.

International Trade Secretary Liz Truss told Sky News on Tuesday that she is confident she can “double” trade between Britain and India by 2030.

Current trade between the two countries stands at “£24 billion” according to Ms Truss.

She said negotiations for a full free trade deal with India will be launched in the autumn and “wins” for each country will be achieved along the way as India pulls itself out of its current Covid crisis and the two countries work out ways to “lower or remove” tariffs in negotiations.

8.22am update: UK must follow EU rules to end Brexit row over NI – Brussels hit out at Boris trade plans

Brussels has claimed only Britain aligning to EU food safety rules will end the row over Brexit trade checks on Northern Ireland.

The European Commission said the move would eradicate most of the customs controls that have sparked tensions in the region.

And a senior EU official blamed the “kind of Brexit” Boris Johnson chose for the recent issues with the 2019 divorce deal’s protocol to avoid a hard border.

Brexit minister Lord Frost and his EU counterpart Maros Sefcovic are currently working on plans to implement the border fix after a recent spate of violence in Northern Ireland.

State pension rules were changed recently as a result of the UK leaving the EU. Going forward, the Government intends to change how UK state pensions are calculated for those who live abroad.

State pension payment calculations are set to change for those who move to the EU, EEA or Switzerland who have also lived in Australia (before March 1 2001), Canada or New Zealand. The Government confirmed this is the result of the UK leaving the EU.

From January 1 2022, those in such circumstances will no longer be able to count periods living in Australia (before March 1 2001), Canada or New Zealand, towards calculating their UK state pension if both the following apply:

8.11am update: ‘What else do they want?’ Scots slam SNP IndyRef2 plan as they warn of Brexit chaos rerun

Scottish voters have expressed serious doubts about the impact a new independence referendum would have on Scotland after Brexit and the coronavirus pandemic.

Scottish elections will see the SNP attempt to secure an overwhelming majority in Holyrood in order to push Westminster into agreeing to a new independence referendum.

Nicola Sturgeon has insisted Scotland would fare better outside of the United Kingdom as she claims London has repeatedly failed to recognise the position of Scots on issues such as Brexit.

But some voters have cast doubts about the plans for independence, expressing concerns about the impact breaking away from the UK would have on the economy amid the ongoing health crisis.

Brexit Britain has reached a “new high” with India and agreed to a £1billion trade agreement, it can be revealed tonight.

Ministers have agreed on a new Enhanced Trade Partnership (ETP) which will boost “bilateral trade and economic relations” with the world’s fifth-biggest economy.

The deal is set to be announced by Prime Minister Boris Johnson as he meets his Indian counterpart Narendra Modi during a summit today in a bid to build a new relationship with New Delhi.

As part of the deal, India will invest more than £533m into the UK economy.

Michel Barnier has admitted Brexit Britain had a successful coronavirus vaccine rollout, saying the UK’s programme was easier to implement than under the EU’s “bureaucracy”.

While he stopped short of praising Boris Johnson’s Government for the Covid vaccine rollout, he admitted the EU had “faults” with its jab programme.

Mr Barnier was asked in an interview whether Britain’s success in rolling out coronavirus jabs was an “extraordinary advert” for Brexit.

Joe Biden is set to reignite his anti-Brexit fury with the UK by pushing any bumper trade deal with Britain to the “backburner”, an insider has claimed.

A trade deal with the US is seen as one of the major targets for the UK Government but the President is set to extinguish any hopes of a deal in the near future as he refers to Barack Obama’s “playbook”, a Washington commentator has warned.

Despite the years of strong allegiance with the UK and special relationship, former executive assistant to Ronald Reagan, Peggy Grande claimed the new President will place the UK as a low priority on his list.

Although Mr Biden’s trade representative Katherina Tai held talks with Liz Truss this month, Ms Grande claimed it is unsure when a trade deal with the UK may become a priority for the President. 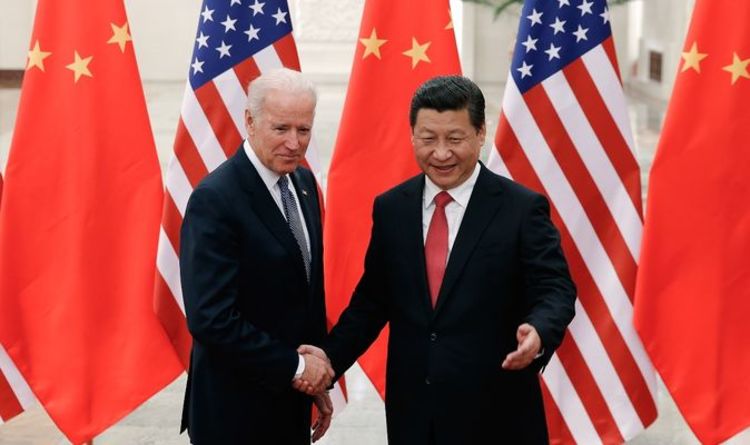 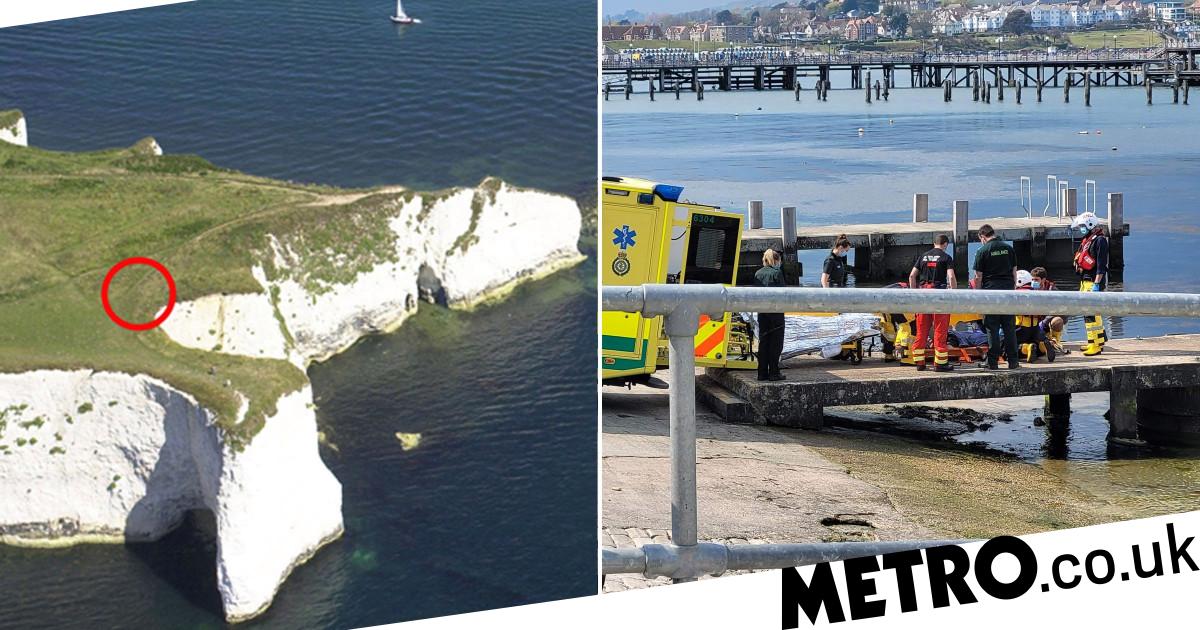