Thousands of protesters marched in Washington, DC, and elsewhere in the United States on Saturday to protest Donald Trump’s Supreme Court nominee and to call for his defeat in the November 3 election while a smaller group of counter-demonstrators held a rally in support of his nomination of Judge Amy Coney Barrett.

A mostly young, diverse crowd of masked women rallied on Saturday in the nation’s capital, exhorting voters to oppose Trump and his fellow Republican candidates in the upcoming elections.

The rallies, which organizers said were taking place in all 50 states, were inspired by the first Women’s March in Washington, a huge anti-Trump rally held a day after his 2017 inauguration.

With the US Capitol in the background, demonstrators march on Pennsylvania Avenue during the Women’s March in Washington on Saturday

A pro-life, conservative non-profit organization urged the US Senate to confirm Barrett to the nation’s highest court

But in the midst of the Covid-19 pandemic, the demonstrations Saturday were considerably smaller.

The organizers sent out messages asking would-be participants who live in states on the District of Columbia’s quarantine list not to attend the rally in the capital.

According to the Women’s March web site, more than 400 demonstrations and rallies were planned all across the 50 states on Saturday

Another protester at a rally outside the New York Stock Exchange in Lower Manhattan wears a face mask adorned with the likeness of Ginsburg. ‘Women belong in all places where decision are being made,’ the mask reads, citing a famous quote by the late justice

Protesters hold up signs quoting Ginsburg in New York City. The signs above read ‘The future is equal’ and ‘Fight for things that you care about, but do it in a way that will lead others to join’

Demonstrators in New York City hold signs that read ‘Here to listen, not to mansplain’ and ‘A woman’s place is in the resistance’

Protesters hold up signs in support of upholding the Roe v. Wade Supreme Court decision legalizing abortion. Another protester holds a sign that reads: ‘My sexual identity is not a “preference”‘

The parade route in Washington started near the White House before heading to the US Capitol and then to the National Mall.

Rachel O’Leary Carmona, executive director of the Women’s March, opened the event by asking people to keep their distance from one another, saying that the only superspreader event would be the recent one at the White House.

She talked about the power of women to end Trump’s presidency.

‘His presidency began with women marching and now it’s going to end with woman voting. Period,’ she said.

‘The first Women’s March in 2017 was historic,’ Carmona said.

‘Now four years later … with 17 days to go (until the election), we’re going to finish what we started.’

Some protesters were heading afterward to the Supreme Court building, where a smaller ‘I’m With Her’ counterprotest – in Barrett’s favor – was scheduled.

The counter-protest in favor of Barrett’s confirmation was staged by the Independent Women’s Forum, a conservative non-profit, according to USA Today.

Most marchers in Washington wore protective masks, with some dressed as Ginsburg in black robes with white lace collars, and several wore the knitted pink hats made famous by the original march.

Hundreds of demonstrators took part in the Women’s March in Nashville, Tennessee, on Saturday

The Nashville march organizers said their goal was to ‘send an unmistakable message of our fierce opposition to Trump and his agenda, including his attempt to fill Ruth Bader Ginsburg’s seat’

Their signs and banners underscored the broader anti-Trump message: ‘Trump/Pence: Out Now,’ read one, while others simply said, ‘Dump Trump.’

March organizers said they are the driving force that will lead to a Biden victory come November 3.

‘We are the hell and the high water,’ said Sonja Spoo, director of the Reproductive Rights Campaigns at UltraViolet, a women’s advocacy group.

‘Donald Trump is leaving office, and there is no choice for him.

Women dressed as characters from the ‘The Handmaid’s Tale’ pose for a photo at Freedom Plaza in Washington, DC

Masses of protesters are seen marching on Constitution Avenue in Washington, DC, on Saturday

One demonstrator is seen dressed up in a prison uniform while wearing a wig and a tie meant to depict President Trump in Washington, DC, on Saturday

Women’s March demonstrators hold signs during a rally at Freedom Plaza in Washington, DC, on Saturday

March organizers in Washington, DC, asked Americans living in states on the District of Columbia’s quarantine list not to attend the event in the capital

Thousands of demonstrators are seen above at Freedom Plaza, though the number likely would have been higher if not for the pandemic, organizers said

Several demonstrators held signs in memory of Ginsburg, including one that reads ‘May her memory be a revolution’

Demonstrators watch a large screen to hear a speaker at the Women’s March in Washington, DC, on Saturday

Pro-choice advocates hold signs during the Women’s March in Washington, DC, on Saturday

Young children dressed up as Ruth Bader Ginsburg (left) and the late House Rep. John Lewish (right) are seen above in Washington, DC, on Saturday

A demonstrator at the Women’s March holds a sign demanding that Trump ‘honor the wish’ of Ginsburg, who is said to have told her family that she did not want him to name her successor

Demonstrators hold Halloween-themed signs in Washington, DC, that read ‘Hex the patriarchy’ and ‘Be a witch, eat the rich’

Meanwhile, a small group of counter-demonstrators gathered outside the Supreme Court to express their support for Barrett’s confirmation

The counter-protest in favor of Barrett’s confirmation was staged by the Independent Women’s Forum, a conservative non-profit

Barrett, a devout Catholic who will likely rule on key issues like abortion, is expected to be confirmed by the Republican-held Senate

‘Come November 3, it will because of women – especially Black, brown and Indigenous women – stepping up and saying enough.’

More than 429 smaller, sister rallies were expected to take place in all 50 states on Saturday, according to the Women’s March web site.

It was one of five separate marches in the city.

‘It’s really important to be here and try to encourage people to vote out Trump and his misogynistic policies, especially now, with Covid, when a lot of people are isolated,’ said Yvonne Shackleton, a 47-year-old working mother from near Albany, about a three-hour drive from New York City.

Many of the protesters carried signs in support of Joe Biden, Trump’s Democratic opponent in this upcoming election

‘Trump! Watch us vote you out,’ one Tallahassee protester’s sign reads on Saturday

Masked demonstrators line the side of a road in Fort Myers, Florida, for the Women’s March on Saturday

Dozens of demonstrators held signs as motorists drove by in Fort Myers, Florida, on Saturday

The Women’s March website, harking back to the huge turnout for the 2017 marches, said, ‘We need to bring that same power and determination to October 17 to cap off Trump’s presidency just the way it started – with massive, women-led resistance.’

He now trails Biden among likely women voters by 23 points, according to a recent Washington Post/ABC News poll. 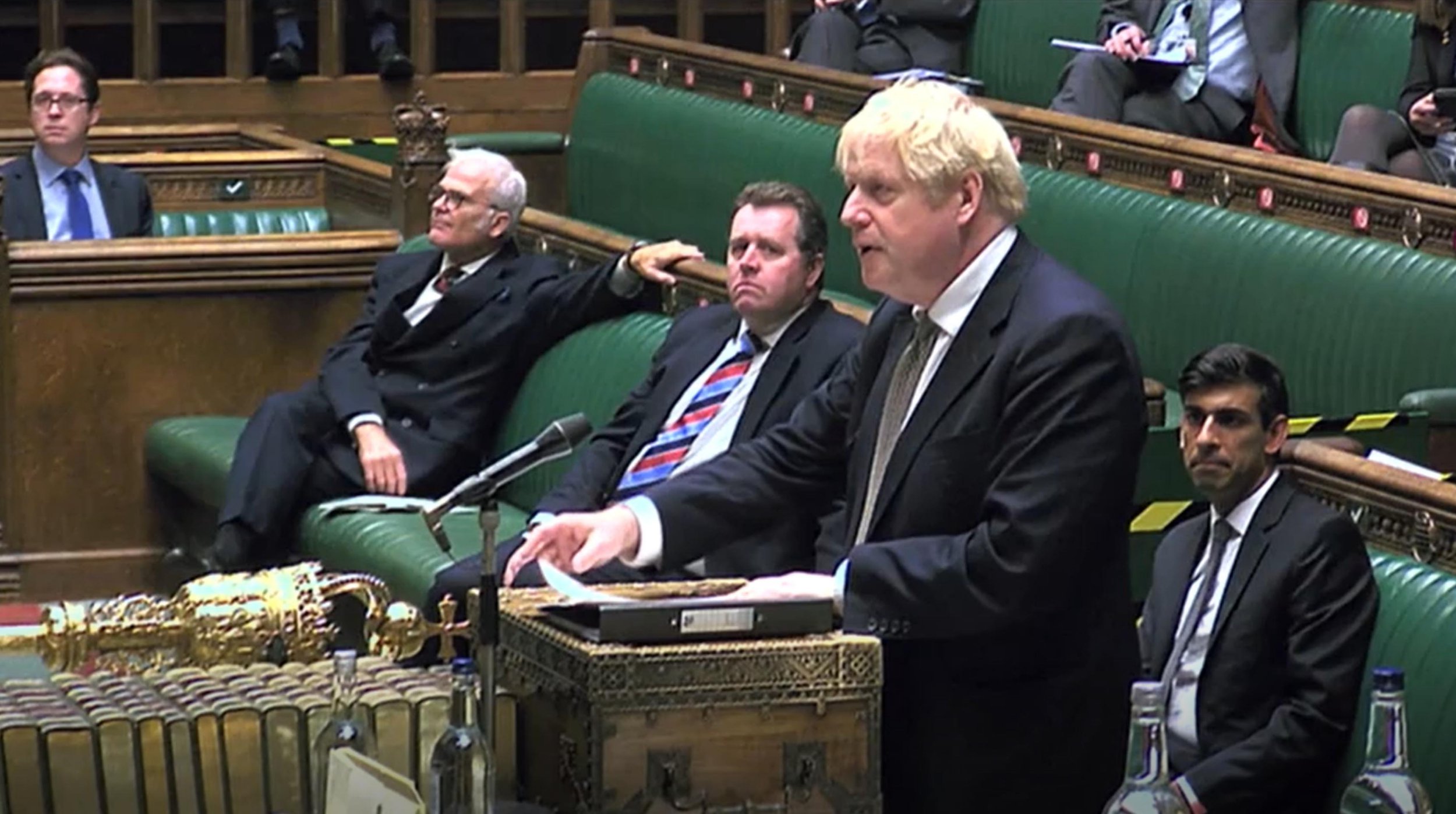 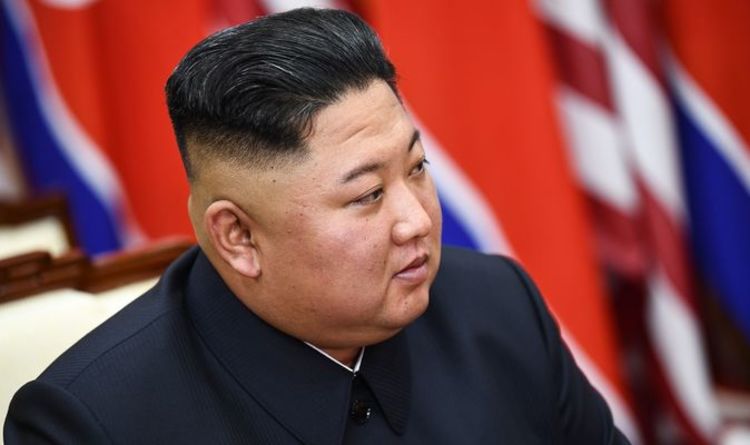 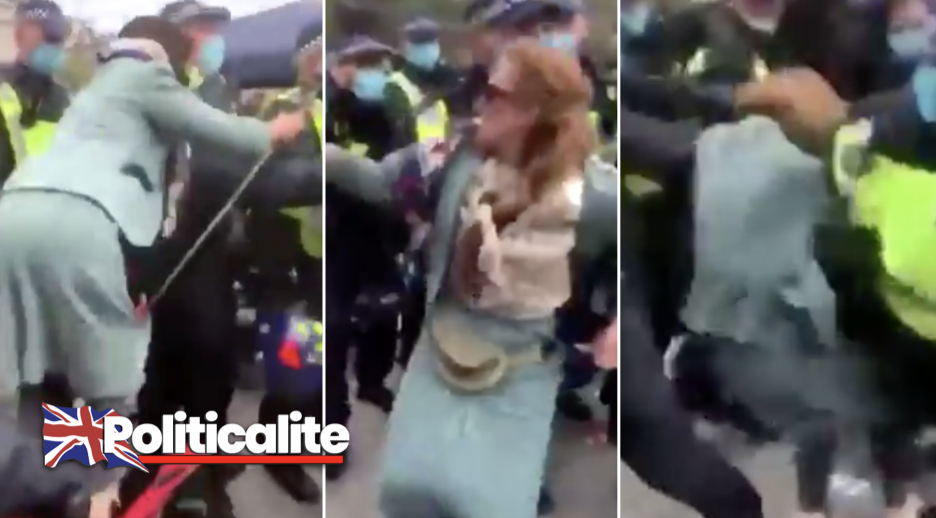 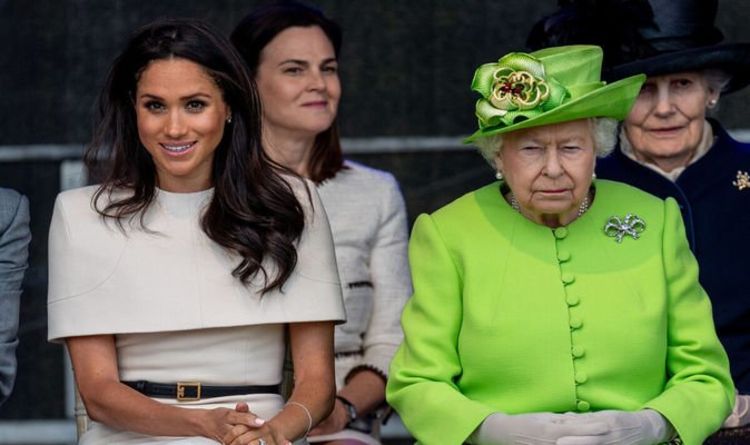 Queen shock: Her Majesty ‘not concerned’ with Meghan Markle’s US election interventions